Presenting Three-Part Series of our Success Story in creating employment and improving the quality of life of youth at the #BottomOfThePyramid (especially girls) from the #LeftWingExtremist (#LWE) district through skills training.

Today, presenting the 1st part of this series: The #SamajSarkarBazaar-#PartnershipModel:
‘#Samaj’’ - Society, ‘#Sarkar’’ - The Government and ‘#Bazaar’’ - The Industry Model (‘#SSBMODEL) worked in realizing ‘#GirlPower’
‘#WeThePeople’ enabled ‘#TranformingTheLivesOf330Girls’
Story of “#GirlPower”
ACHIEVEMENT AS ON 30TH DECEMBER 2020: Under the DDUGKY- Balaghat Project, ‘We The People’ has so far trained 330 girls as on date with a placement record of 93%, the highest percentage of placement made by any #ProjectImplementingAgency (#PIA) associated with #MadhyaPradeshStateRuralLivelihoodsMission (#MPSRLM) under the said scheme in the state. These figures are being audited by the authorities.
The Deen Dayal Upadhyaya Grameen Kaushalya Yojana (DDU-GKY) is part of the National Rural Livelihood Mission (NRLM), a flagship Centrally Sponsored Scheme (CSS) of the Ministry of Rural Development (MoRD), Govt of India for employment linked skills training of the youth at the bottom of the pyramid (#BoP). DDU-GKY’s primary objective is to augment the incomes of rural poor families and cater to the career aspirations of rural youth.
To summarise the project in brief:
‘We The People-NGO’ was the first and the only organization that started DDUGKY skills training programme in Balaghat District in 2018. Till that time, even though there were more than 40 #ProjectImplementingAgencies (PIAs) were working in the state but no one had started the 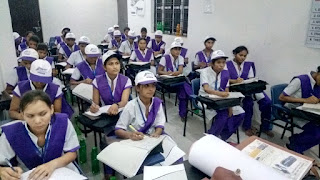